It’s the second to last day of the conference and honestly, I’m already feeling worn out. I suddenly realize how big this place is. A conference of this magnitude can be overwhelming and can take a toll on one’s well-being. It’s starting to feel that way for me, though I’m still excited to attend the rest of the conference.

Today was unique. There was star power in this conference. It began with Charlize Theron in the opening plenary, then Sir Elton John, and now Prince Harry today! People were very excited. I guess that’s why they are called celebrities. They can create the feeling of excitement. Both have been visibly supporting the fight to eradicate this virus for quite some time now. Sir Elton John joined Princess Diana to create the Elton John Foundation. It has given money to AIDS research and prevention programs, while Prince Harry has been a staunch supporter of AIDS relief efforts. He recently went on public TV and took an HIV test to show people how easy it is to get one. He also wanted to empower people to become aware of their HIV status and get treatment if needed.

I was able to get a glimpse and photo of them writing notes on the board that the conference provided for everyone wanting to express their thoughts and feelings. They were then featured in a session, sharing their stories on how they became advocates of HIV prevention and other relevant work they were doing. It was exciting and surreal. 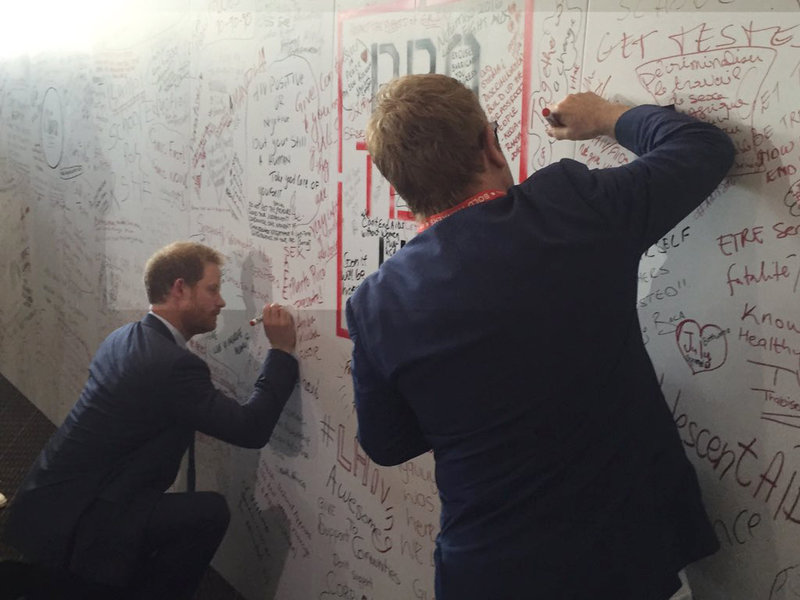 I took some time out to reflect on how this whole week has been for me. Aside from meeting amazing people, hearing great speakers has been inspirational. One speaker that left a great impression on me was Constitutional Court Judge Edwin Cameron from South Africa. The world needs more people like Judge Cameron. This man was elegant, eloquent, and powerful. He discovered that he was HIV positive in 1986, and has been described as “one of South Africa’s new heroes.” He is a new hero for me. He was a human rights lawyer during apartheid and has worked to safeguard human rights, which includes the rights of gays and lesbians in the new constitution of South Africa. In his speech, he focused on protecting human rights and reducing stigma. What sets him apart is that he boldly addresses the issues that are on hand with great dignity, voicing why it is a problem and what we can do as a whole. One particular sentence that really proved to be true was that to address AIDS, “we must confront those particular forms of inequity and injustice – unfairness, discrimination – not in the abstract, but in its specific and concrete manifestations which fuel the spread of AIDS.”

With the theme of this year’s conference, it was perfect timing for him to address this. He also pointed out that 78 countries in the world, in which 34 of them are in Africa, still criminalize same sex conduct. This doesn’t help the epidemic at all. He also pointed out that we should ask why sex workers do sex work. “To buy groceries and pay their rent,” he said. Why do many ostracize them?  Sex work is hard work. They deserve everything like everyone else. Read his entire speech here.

Toward the end of the day, I attended my final session for the conference. It was entitled, “Sex Magic: Advancing Trans & Non-binary People’s Sexual Health & Rights.” This session was targeted to community organizations and networks of transgender people. Attendees were going to hear about the existing health disparities among trans people, their specific health needs, and good program implementation practices. After hearing the speakers, the attendees spoke up about how this was actually happening in the conference itself. Attendees brought up issues such as having one gender neutral bathroom for the entire conference. They talked about how the entrance to the global village was divided into “male” and “female.” The example given by the speaker sealed the deal for this ugly truth.

A conference attendee who was MtF from a South American country injured herself with a broken arm during the first day of the conference. She was brought to the hospital and immediately scrutinized for insurance, being told it was not valid. When that was settled on the third day, the hospital found out about her status as transgender, and then wouldn’t operate because of her transgender status. They didn’t know if she would be placed with the men or women. The people at the conference had to intervene and pushed hard for her to get the medical treatment she needed. This was a classic example of a health disparity that hundreds of trans people go through. It was great to have this brought up to the public. We didn’t want any harm done to anyone, but it would take this extreme to prove that this incident happened. 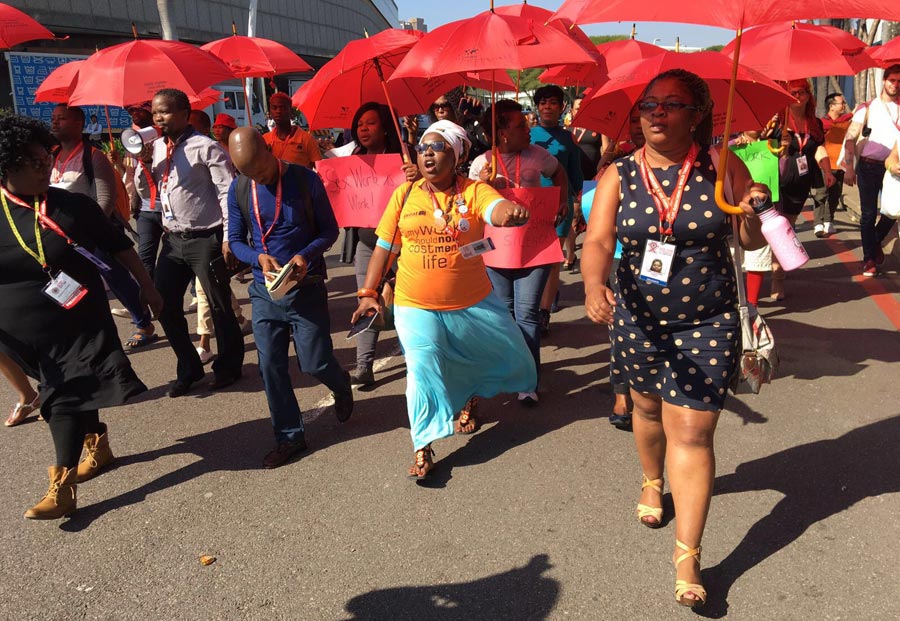 As the session ended, knowing that I would be embarking on a 30 hour travel back to San Francisco, I took a walk around the convention center, taking a final look at the wonderful conference. I am happy to have been given this opportunity to experience the International AIDS conference in 2016. I am feeling empowered, energized, and confident about the work that I do. It has been great, and many of my practices are par to the universal expectations. Knowing that there are 18,000 people who are together with me in combating this disease, fighting stigma and addressing the fight for health and human rights equity for everyone makes the battle for “getting to zero,” not rough at all.