From all of us here at here at San Francisco Community Health Center we thank you from the bottom of our hearts for all your generous support in making The Pearl Gala a successful event for us.

Your contribution goes along way in improving the programs and services that are critical to the people we serve here in San Francisco. 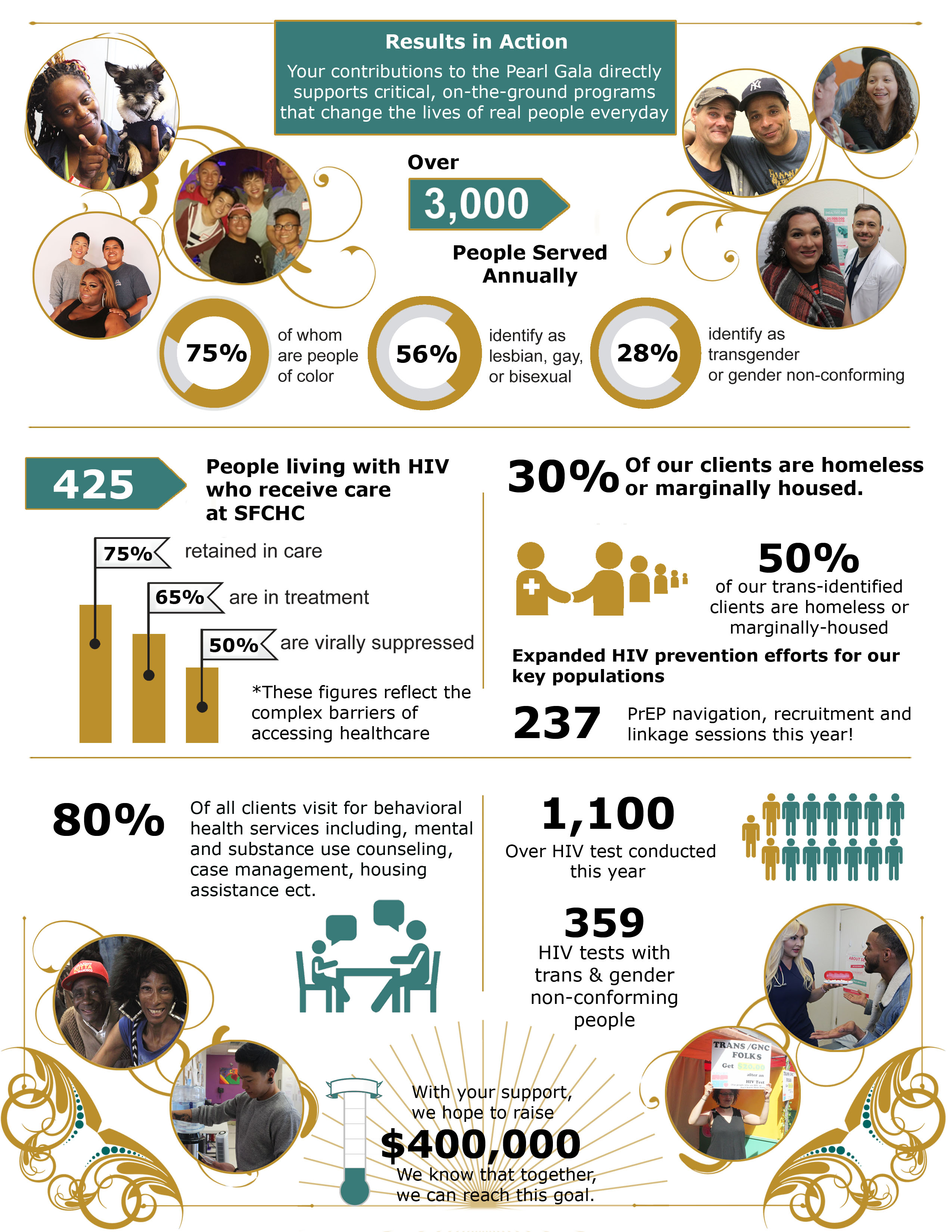 Join us with legendary Grammy award winning disco, soul and R&B singer Thelma Houston. After decades captivating audiences around the world with her signature blend of high-energy dance classics and soulful ballads, Thelma shares with us her hit classics “Don’t Leave Me this Way”, “Saturday Night, Sunday Morning” and more!

Tita Aida (aka Nikki Calma) has worked at San Francisco Community Health Center and its predecessor organization, API Wellness, for 18 years. Her life has been dedicated to raising HIV awareness in our communities, at SFCHC, Asia SF, and the many clubs and events she organizes and emcees.

Dale is proud to have worked in the field of HIV for over 23 years and counting. He also supports various non-profits through his fundraising efforts. Dale has witnessed the unwavering compassion and care SFCHC provides all their clients and is honored to be here as the Live Auctioneer.

Honey Mahogany is an American drag performer, entertainer, singer and activist. She appeared in Season 5 of RuPaul’s Drag Race. She first started performing in drag while earning her undergrad at USC, then stopped until she was in grad school at UC Berkeley where she co-founded the annual drag competition. She joins us as our after-party host.

Slum B. currently resides in Oakland, CA. by way of Chicago. Although she prides herself as an eclectic DJ, she favors underground/Electronic Hip Hop and Chicago House/Dance Music. Spinning at all the hip Bay Area parties including Ships in the Night, Hella Gay, Foot note, Soulovely and more!

As a musical instructor at San Jose State University, Christian has brought together many instrumental ensembles that range from classical, contemporary to jazz.

As one of the premier health organizations in Oakland, CA and serving the community for over 34 years, CAL-PEP has holds a strong legacy in heath service for those marginally housed and who are or former sex workers. We particularly want to uplift co-founder and executive director Ms. Gloria Lockett who is set to retire.

Originally founded in 1970 serving low-income families in the Hayward, Union City and Fremont areas, Tri-City Health Center has grown to be a Federally Qualified Health Center (FQHC) and has become a bastion for LGBTQ health especially Trans health and tobacco cessation.

Getting To Zero San Francisco

In many ways San Francisco has led the way in setting standards for prevention, care, and treatment recognized around the world. GTZ is on the path reduce both HIV infections and HIV deaths by 90% from their current levels by 2020. Through coordinated efforts around the city and leverage existing resources to maximize return on investment, working under the umbrella of the City of San Francisco.